Throughout human history, narrative, a.k.a. storytelling, has not only been a tool for understanding the world around us (see: any creation myth) but also a way to understand other perspectives. We get carried away in experiences we could never have in our real lives (see: any movie about suffering, heroism, or revenge), but we have the chance to imagine what we would do in our favorite character’s shoes.

Of all the elements of a story, a character’s style is special because it’s usually the easiest part to imitate, and dressing like a character connects us to their story in a physical way. From tricked out cosplay to something as simple as copying James Dean’s jeans and t-shirt look, emulating a character’s style can make you feel a little possessed by their power—this is why you may feel more elegant dressed as Audrey Hepburn in Sabrina, but more powerful when you dress like Uma Thurman’s character in Kill Bill.

It can seem like a simple formula of I wear, therefore I am, but it’s much easier to relate to a character and their story, no matter how fantastic, if you can see some part of yourself in them. Not all stories resonate with all people, and a dissatisfaction with representation in modern media is what’s getting artists like Princess Nokia and Lupita Nyong’o loved up by people who feel like they never get to see a version of themselves being awesome.

For artist Tori Huynh, the challenge of injecting a genuine, sensitive Southeast Asian narrative into the Western media stream is what led to her art book and upcoming graphic novel, Hai Bà Trưng. Here’s the summary of the story, via Huynh’s Kickstarter:

“Hai Bà Trưng, translated to “the two Trưng sisters”, is an adaptation of the legend of Trưng Trắc and Trưng Nhị, who liberated Vietnam from Han China in 43 CE after the death of Trắc’s husband, Thi Sách. Reimagined in modern day Saigon/Ho Chi Minh City as a revenge bike gang drama, Hai Bà Trưng’s events follow Trắc and Nhị in their search for Thi Sách’s murderer.”

Spinning a story from scraps of myth and modern Vietnam, Huynh became both an illustrator and fashion designer when creating meaningful outfits for each character.

“In basic character design, you always want to reflect pieces of a character internally and externally,” Huynh said. “So, how do you describe someone’s internal universe with their external clothing? [Developing the outfits] was an exercise in developing someone, who are you, what do you show, what does that say to other people? Costume design was a really fun part of developing it.”

Just like a fashion designer has to create a cohesive collection with an overarching theme in mind, Huynh had to make sure each character’s style was unique without being so different that they didn’t feel natural as a group. From their gang souvenir jackets to their everyday outfits, fighting weapons, and mopeds, each character’s style was drawn with careful consideration of how they fit into their environment.

“[Designing the costumes] was a fun way to explore a character… I was doing a lot of research on Asian street fashion,” Huynh said. “With street fashion, you see kids with half-shaved heads and bleached eyebrows, or a tracksuit that doesn’t match their jeans…it has a different life to it than what you would see every day or runway, which is less organic, more curated.”

Huynh broke down each character’s personality and created styles to match.

“[Trac] is very tomboy-ish, and wears a lot of jeans and baseball shirts,” Huynh said. “She’s very utilitarian with her fashion choices, which I think is also a part of her character. She’s the responsible one.”

“Ni, she’s the cute, spunky younger sister. She’s much more fashion forward, with super blond, short hair… it was a challenge to do her, because since she’s younger, I didn’t want to put her in clothes that made her look too mature…[her weapon is] a hammer wrapped in bunny tape. I actually own a hammer just like it, but it’s wrapped in hello kitty tape.”

“[Thi is] this super tall, buff teddy bear with a shaved head, and he’s also blonde. I wanted to portray a person who literally just got up and put on clothes and it works. It was a cool challenge, how do you draw someone who looks effortless, but also like kind of a slob? I think that comes up pretty often in street fashion, you look kind of sloppy but it’s kind of cute.” 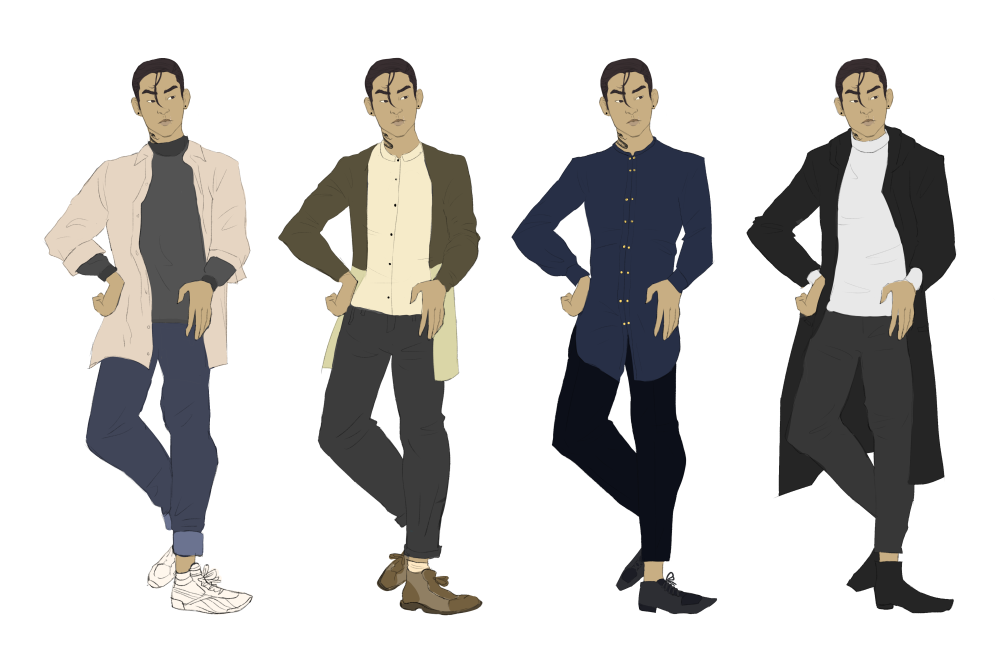 “[Dinh is] the more traditional character, and he’s the bi-racial one (Chinese and Vietnamese)…I gave him much more clean-cut clothes, sort of traditional East Asian and Southeast Asian shaped clothing. The shirt that he wears kind of looks like ao dai…I was really excited to give him a jade necklace, because it’s a really common thing that a lot of Vietnamese men wear.”

Huynh built up a following of first and second-generation Vietnamese fans while creating the artwork for Hai Bà Trưng, and she continues to use their support to motivate her as she develops the graphic novel. Using self-exploration and cultural research, Huynh is dedicated to making a work that strikes a chord through style, story, and design.

“I was really blown away by the support I received from people…I wasn’t expecting people to care about it the way that they did, but people seemed really excited about it because they saw themselves and people who look like them…it’s kind of a starved audience,” Huynh said. “I’m trying my best to make it as true to myself and to the culture as possible.”

To keep up with Tori Huynh and Hai Bà Trưng, you can visit her website here.

All images courtesy of Tori Huynh.