One of the reasons I started this blog was to create a space to talk about fashion and style in a more complex way than what I find on many other fashion blogs, where style seems to exist in a superficial vacuum (ambiguous shots fired). On these fashion blogs (and they are not all fashion blogs) fashion is presented as if all it takes to develop a sense of style is money and the physical ability to put on clothing, a delivery that goes against what I think many of us are looking for: we aren’t interested in learning how to dress, we are interested in learning how to dress well.

In my mind, great style isn’t informed by what we can afford to buy, but by who we are.

In my writing, I often pull from academic works in sociology or history and re-frame the information to be more approachable and entertaining, but my most favorite way to learn about the complexity of style is by talking to complex people. This brings me to my latest interview subject.

Kelsey Weller is a serial career woman, a part-time model, and a full-time immune system enthusiast living in the Angeles National Forest. She came onto my radar when I found her Instagram, which peaked my interest for its mix of fashion, scenery, and holistic food photos. After talking with her, I think of Weller as an example of someone with a well-rounded life that informs dress, not someone for whom dress is a lifestyle—you can read about that here.

Right now, I work at a Waldorf school [which is] a school that’s really rooted with gardening and teaching bio-dynamic farming with children. I do that part time, and then I also model.

I model for a variety of people, usually local Los Angeles designers, typically people I know that are more independent. A lot of the people I work with are local makers and creatives [including Beatrice Valenzuela, The Corner Store, and Lisa Says Gah]. They have a vision and a real creative force behind them, they’re telling a story [and the collections are] a snapshot into their brain of the kind of world they would want to live in. Recently a lot of the people I’m modeling for have lines that are inspired by place. Travel is so inspirational, and being able to see culture come into play, [these lines] are an homage to that. When you’re wearing [the pieces] you feel that.”

On her adoptive upbringing and growing up mixed-race

“I know my biological mother very well, she’s not much older than I am and she’s really awesome. She’s gone back to college as an adult and studied environmental science. We have a lot of common interests. But in a lot of ways, I was raised with privilege and I don’t hide that. My parents who raised me are white, I was put in private schools that were predominantly white, and at times that was very hard on me growing up.

I think I have a complicated relationship with my identity, but it’s gotten easier as I’ve gotten older. I do identify as Mexican-American, I’m also Native American, I’m Syrian, and I’m French…I understand that I was culturally raised white, but I don’t think that devalues my experience as a body of color. I have a lot of friends who are mixed, adopted, and people of color, and I’ve had conversations about that, about not being completely accepted by any community. It can feel really isolating sometimes.

I’m huge on Gloria Anzaldúa, Cherríe Moraga, and a lot of women who write about what it’s like living in between. Reading those writers really brought my comfort and helped me understand that there are a lot of ways to be and I don’t have to box myself in to any one thing.” 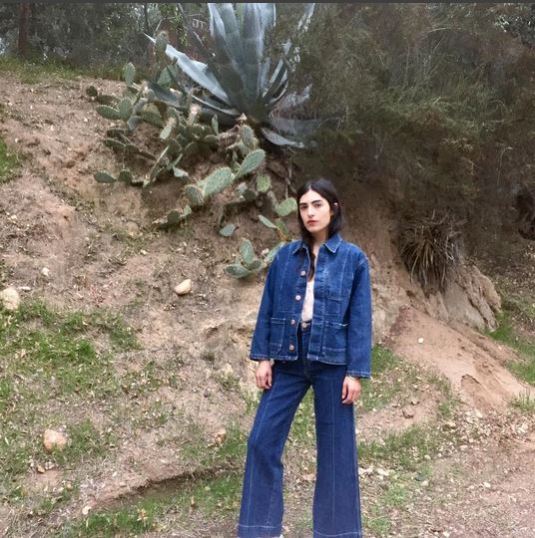 On her auto-immune disease

“I have an over active immune system and have struggled with it for over a decade…I first got sick when I was 15 and… finally they told me I had a type of Chronic Epstein-Barr virus and it’s hard to determine what it will turn into down the line (at this point). I had to make a lot of big shifts in my life when I was about 20, a lot of it having to do with my diet and lifestyle. I don’t drink, I don’t smoke, I have a very strict diet. That was really hard on me.

It still is hard, [but] these things probably propelled me into getting into gardening and soil, composting and understanding vegetables. It really helped me get into science and natural health as an adult. In my free time, I read a lot of medical studies and textbooks, pretty much anything I can read to understand the immune system, T cells, anything that helps me to better understand why my body isn’t functioning properly. [Note: Weller often refers people who come to her for special dietary advice to the Weston A. Price Foundation.]

I think getting sick changed my life in such a dramatic way. I probably would have gone to a different college, I probably would have studied fashion, I’d probably be [working in fashion] now. It’s a push and pull I constantly deal with, [between] loving beautiful things and being able to express myself with clothing, but at the same time there are so many not so nice parts of the fashion and clothing industry that I recognize. If I hadn’t gotten sick, I think I would be doing something, not necessarily more conventional, but more tied into fashion and on a more typical path in that sense.” 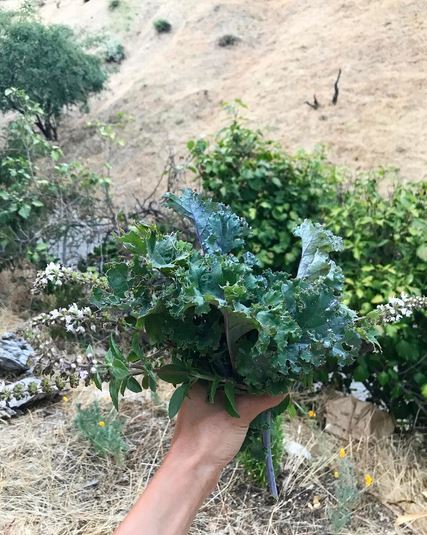 “I would describe my style as early 80s Bruce Springsteen meets 1970s Anjelica Houston meets Katherine Hepburn in her gardening attire. Well, maybe in my dreams. My style is anything I can easily move in and that can be washed.

I’ve always been obsessed with 1930s farmwear and Dust Bowl clothing…Obviously, that’s such an annoying thing to say because I realize they had that clothing because they didn’t have money and it was during the Great Depression, but I think I’m just attracted to the idea that they have pieces of clothing that they were constantly repairing and not just getting rid of it…I also just really love the silhouettes, usually made of natural fabrics that are meant to be lived in and worked in.

Most things that I own, if they are a recognizable brand or designer, those were gifts. I don’t have the money to buy a pair of $300 shoes, and even if I did, I don’t think I’d do that. Not against anyone who does, but I just bought a house and I’m really into thrifting and re-using what’s already there. I’ve never been failed by a thrift store and I just have different priorities, but I’m always really flattered when people ask where I got my clothes, because I’m just wearing second-hand stuff.” 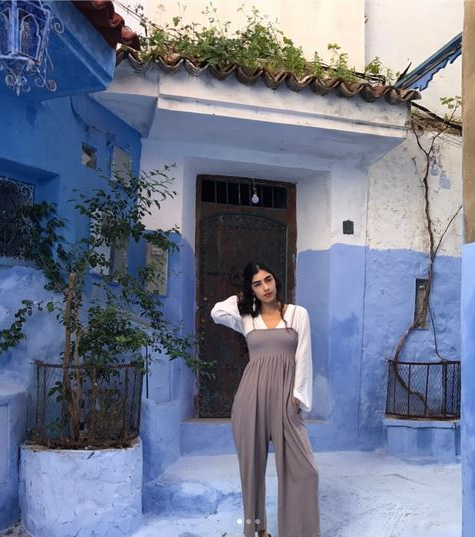 On (some of!) the special people in her life

“My father and I have a really special connection…I truly feel like he was supposed to raise me. There’s just an intuitive vibe between us. He’s an incredible painter and musician, and I think he’s trying to get everything he can out of his life and trying to be as hands-on with it as possible…We just have a very special bond that I think is rare to find. This is going to sound so Freudian, but my husband and I definitely have that bond as well and [my father and my husband are] very similar people. Also, [my father] has the best style ever, I feel I should note that. His style is very 90s George Clooney in Italy, if I’m going to get really specific.

Beatrice Valenzuela is a mentor and friend and I used to work for her when I was working in design…She’s someone who’s just been incredibly supportive in my life and someone I care for so deeply. I’m Chicana, I’m mixed race, similar to her heritage, and I think that for me it allowed me to get in touch with that part of myself. Her clothes are very flirtatious and sexy, and I’m not the most flirtatious and sexy person in real life. Wearing her clothes made me feel really good and empowered.”

“Quarzazet was really special to me. [My husband and I] stayed with a man named Mohamed whose family has owned their Kasbah for over 400 years…it’s a UNESCO protected site and it’s really interesting culturally.

We would just sit and smoke hash with Mohamed, cooking incredible slow-cooked meats or beans cooked with dates and figs, and just hang out…there was such a focus on human connection, which I think we lose sight of sometimes in our fast-paced world. There’s also no internet or electricity, which I absolutely loved…being there made me realize I didn’t miss that. When we were in other parts of Morocco, it was way more touristy. It was still an amazing place and we went to beautiful museums, but [Quarzazet] was…an area that not everyone gets to see.”

“I’m big on tradition, [and] tradition to me is my set of beliefs put into an experience, something I can continue to do and encourage others to take part in, and pass on to others. I didn’t grow up in a religious household but we had our traditions, like my dad and I always going to the Huntington Gardens together on one particular day of the year and he would try to get me to memorize as many flowers and plants as I could. It was a learning experience and it was something I could look forward to. Even preparing a special meal, a birthday breakfast with my family is cheesy…It’s something special and I can always count on. Maybe the line of tradition and ritual gets blurred for me, but they both mean a lot to me.”

On what she hopes people take away from her Instagram

“I hope they see someone who has complexities to them…who isn’t just a character of the internet. Of course, when you’re just posting photos, they can only see one dimension of it, but I want people to see that I do have contradictions in my life, that I can like nice things but I can also be shoveling shit the next day, literally…it’s not always going to be clean and beautiful.” 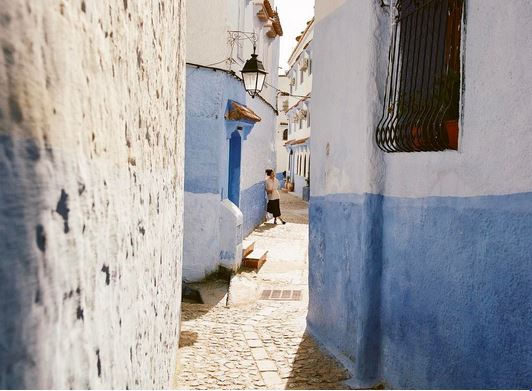 All images courtesy of Kelsey Weller